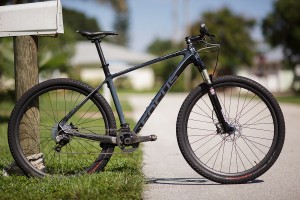 We were having the greatest day. Erika and I decided to go mountain biking together. She’s tall and gorgeous and so of course, she is a perfect fit for my tall and gorgeous husband’s elite mountain bike. So fresh. Anyway. We took our time with our ride – enjoying the pretty views, noticing that an osprey actually makes a sweet little “chirp chirp chirp” sound instead of the terrifying squawk I assumed such a glorious bird of prey would make, and yelling, “Woooo!” as we went over the fun obstacles and add-ins that Club Scrub has been working so hard on providing for us. #thanksDorsey 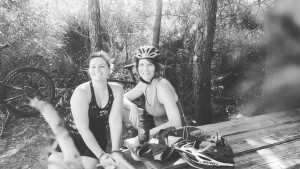 We took a little rest after Doe and snapped a selfie on self-timer. A dude rode by while I was trying to strategically place my phone in a tree branch. My response to that was, “Yes! Now the spiderwebs will definitely be all gone, Woot!” I prepped Erika for the ride, letting her know that just as she was getting comfy with the awesome initial downhill on Big Burn, she’d have to slam on her brakes for a sharp right turn right before an uphill. Big Burn, you’re such a jerk. Anyway.

We finished up Big Burn and ran into some bird dudes on our way to Fire Ring (ok fine it’s a lot better than it used to be. again, #thanksDorsey), the last of two trails we were planning to complete. It was apparently Scrub Jay Wednesday at JDSP, and they were out looking for birds. They saw a bald eagle and they even saw that Osprey I saw. Apparently it had a white stripe on its butt. I didn’t notice because I was trying not to crash my mountain bike at that point. It was more like, bird-osprey-chirp-really?! 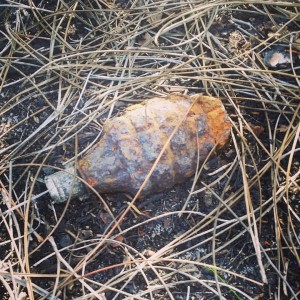 I crashed my bike at the first hairpin turn on Fire Ring and all the air burped from my tubeless tire, so I had to stop and refill it with the nifty cartridge thing David put in my CamelBak. While I was doing that, as we’d been drinking PLENTY of water trying to cool down, tall, gorgeous Erika decided to find a discreet place to relieve herself. “I’m going to pee too!” I said. “Gotta get this fixed first.” I was working on my tire when I heard, “Oh. My. God. There. Is. A. GRENADE……!! Right behind me!!” I thought for sure maybe it was a pine cone that maybe LOOKED like a grenade. But no, it was a grenade. A rusty old grenade surrounded by the blackened trunks of the palmettos that had just recently gone through one of JDSP’s controlled burns.

Of course I had to take a photo of it. Eerily, as I clicked the button, the self-timer started to count down. Just what you want to see, a countdown superimposed on a photo of a grenade. So, as I’m getting back to the bike, Erika is just leaving the area because, um, grenade! It looked to be WWII era, so probably totally significant and historical and stuff, but who knows, maybe it survived all the controlled burns and rains over the last 3/4 century; she didn’t want to take a chance. I justified my hanging out near the grenade as me making sure the authorities knew what to look for! It was not in great shape! 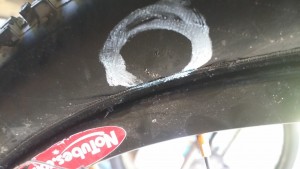 So after that, I crashed my bike again, well not really crashed, but I did rip my tire (discovered later, dang roots!) and burp the air again. Argh! Refilled it again, rode on, but not 30 yards later the air was gone again, partially due to me forgetting to tighten down the valve and partially due to the rip in the tire. I had to go pick up my car riding on David’s bike back to the lot, then go pick up Erika from the spot on the side of the road I directed her to. I forgot all about the grenade until I got home and finished posting Strava results, when I added the grenade pic to my ride.

So then I called Dorsey, the Club Scrub president – he is in charge of all our mountain biking trails and I thought if anyone would know who to contact, it would be him. Sure enough, he rattled off several organizations that went over my head that he was going to contact. Historical something something…(oh crap, did we almost pee on an artifact!?) I told him exactly where it was (that hairpin turn needs to be renamed “grenade-pin turn” for sure, btw) and he found it, thank goodness.

About 5 o’clock, in between counseling sessions I got a call from Dorsey and he’s giggling his ass off. I don’t know how else to put it. Sorry, pardon my french, or whatever. “You should come down here!” he says. “They’ve got a semi, two firetrucks, the sheriff’s office, and some people that are going to blow it up! Nobody wants to touch it!” Whoa. Glad Erika didn’t pee on that grenade, sheesh!

I got a text later after a few other sessions that apparently it was a paperweight. Man, I felt kinda naïve! But it looked so real! And apparently the authorities were convinced. I felt a little better considering that, but still a little sheepish. Then I was informed that it was an actual grenade, but it had been drilled out to make a paperweight. You know, like “Complaint Department, pull here” type of thing. Hilarious! Except when you’re about to take a pee in the woods right on top of it. Eeks!